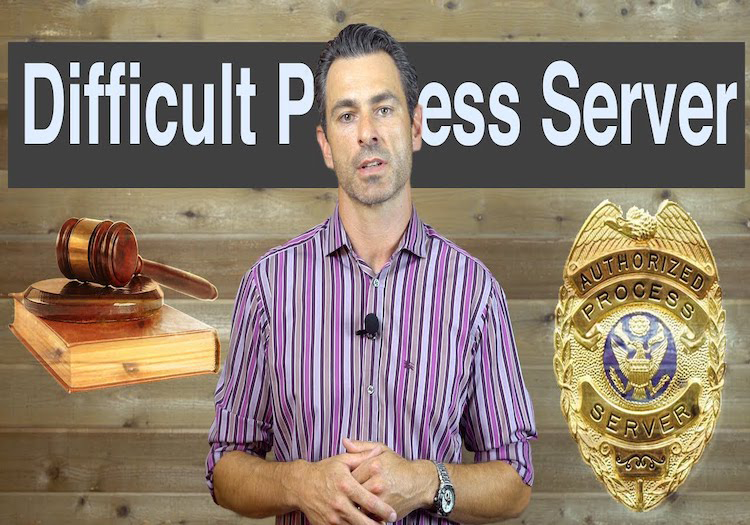 Service of process especially evasive service of process can get ugly.  I’ve put together this process service compilation video for your viewing pleasure.  In upcoming videos I’ll be sure to break down how I keep safe, avoid physical altercations and when I need to serve docs on the go!

This compilation of serves is not only for your viewing pleasure it’s a perfect example of how to serve violent persons or persons being evasive.

Video number one: Mr. Hollywood Producer. He swindled persons out of money and it was time to sue him. Process Servers had been trying unsuccessfully for over 2years to locate and serve him. Sadly, I won’t go into how easy it was to locate him but I will tell you about the serves. We knew this loser would contest the serve so we put ourselves in a position to film everything. We made sure to get him away from the house and once out of the car, we got him & left.

Video Number two: This guy also swindled folks out of A LOT of money and did nothing for it. The investors were worried he’d lose his temper and had us nearby. Once things cooled down, he was notified and served. (Again without incident)

Video Number Three is the elusive Katherine Beisel. This loser graduated from Harvard and works as a consultant. When she’s not working and trying to hire someone to murder her ex husband, she scams Harvard Alum out of money. This serve has a special place in my heart as she was very hard to find. This gal lives in hotels and drives rental cars. Once we located the hotel, we had to wait her out. On the third day we switched to LATE evening hours. When we saw the Red Box food deliver driver, we had a hunch it would be for her. We kept a low profile and once out of the elevator and talking about her order, we pounced.

Video #4: Mr. Church! According to the complaint, he and Donatalla Panayiotou, were being sued for using a fake credit cards and ID to purchase jewelry from a Beverly Hills Jewelry store. Though it took two days to locate him, we did. We arrived, observed his (at the time) vehicle, and waited him out. We wanted this serve on video as it is alleged that he uses fake identification and credit cards.  When he stepped out, you can see the rest for yourself.  Identified, notified: served.

Video #5: Donatalla Panayiotou.  We wasted a day looking for her because we assumed that being on the show Love & Hip Hop, she lived in the Hollywood Hills address she’s associated with her.  We should have known better.  After her appearance in DTLA was over we followed her to an “after hours.”  That’s when we pounced and served her with the court documents.  According to the complaint, she and her (at the time boyfriend) used fake identification and credit cards to purchase jewelry from a Beverly Hills jewelry store.

Video #6: Big R. This guy was in hiding! He beat the shit out of his wife and then hid with is ex girlfriend in Compton CA. Other private investigators and process servers couldn’t locate him. To be honest with you, they clearly didn’t try. We located him in a matter of minutes and had him served within hours! You’ll notice I sneak up and then make myself visible to him when he’s committed to helping his girlfriend out of the car. I then in a low tone stated “Ron, I’ve got papers for you.” Not only did I know it was him (client gave me pictures and his facebook images of his Tattoos gave him away). He also responded to “Ron” LoL. To avoid confrontation, I stepped back and to the side. I also direct my attention to the papers. This takes the intensity out of the “confrontations” and they naturally/instinctually focus on what I’m focusing on.

Once he’s identified, I took the temperature down a notch and tossed the docs on the roof of the car. Once I recognized he said “I’ve got the wrong guy,” I turned the camera to his face for an ID and then backed out to get his vehicle plates and street signs. Talk about triple conformation! His new address, ID shot, vehicles to him and girlfriends Prius. What an asshole. He is currently trying to plea deal with prosecutors.

Video #7. Brian the terrorizer. This guy is a lunatic. He beat an attempted rape and kidnapping charge back east.  Today, he continues to terrorize woman.  He is currently out on probation and living with his new GF.  Look out K-Town and sex clubs!

In this video I tried to get him outside of his apartment. This gives me space if things get intense or go “Sideways.” My first method for defense is to stay lowkey. I use a soft voice and I make sure to change my posture when serving violent persons. Since I didn’t catch him outside, I got him inside of his apartment. When he came towards me, you’ll see I tossed the docs onto his couch to distract him. I turned and headed down the stairs, not looking back.

Dr. T. Yes, doctors and attorneys are notorious for evading process servers. This gal had been evading process servers for weeks. The poor process servers kicked ass. They found a way into her building several times to no avail. Then we were hired. We arrived and located/identified her vehicle. Once on the move, I knew I’d have to get her on the road. If I had waited, she would have arrived at work and I wouldn’t be able to get her there. Once she was stopped at the red light, I made my move and things went well.

Video 9: This guy was evading service and denied previous serve attempts. Lucky for me, this jerk was on facebook along with his dogs. Once I confirmed he lived in his apartment and we located his vehicle, it was time to wait him out. With dogs like that in a little single apartment, you know he has to come out at least twice a day ;-). In other video, I have him exiting his apartment and A great ID shot. I used my cell phone as he was on the move and I was hopeful to get the audio of our serve. Dude, thought he was so clever and walked the dogs around the back entrance of the apartment building and ran to the front door of his apartment. Sadly, he didn’t know I repositioned my vehicle and filmed the entire thing. Courts upheld our serve and the won their judgment against him.

Final video is of Mr. Super Jerk.  I approached with cool and a calm demeanor. When he tried to square up with me, I stepped back and too the side. I then looked down at the docs and told him “I could toss them on the ground or hand them to you like a man.” He took the docs and I left without incident.  Perfect process serve